A Fantasy Bracket for the Queen Crowd

A Fantasy Bracket for the Queen Crowd

The strategy behind ‘RuPaul’s Drag Race All Stars’ Fantasy League.

For RuPaul’s Drag Race All Stars fan Justin Cooter, watching the show every Thursday night isn’t just a ritual, it’s a competition. Cooter has been a fan of VH1’s Drag Race and its All Stars spin off since season one, but this season he’s also tuning in to make sure his final drag queen fantasy league bracket, including Shangela, Trixie Mattel, and Kennedy Davenport continues to win.

VH1’s digital team launched RuPaul’s Drag Race All Stars Fantasy League in January of this year. To date, the interactive microsite has attracted more than 55,000 players and nearly 1 million cumulative page views, according to internal analytics. The game has become the most popular Viacom network fantasy league, surpassing similar leagues created for MTV’s The Challenge and Are You the One? and LOGOtv’s Finding Prince Charming.

It was designed to encourage fans to tune in to the live show and interact with one another—supporting ratings and engagement with commercials. “Rather than passively viewing a TV show, second screen challenges encourage fans to be actively involved,” says Dean Donaldson, co-founder and director of Kaleidoko, a transformation consultancy. “It’s a way of driving people to watch the live show and drive live TV viewing figures up.”

The site also enables VH1 to engage with fans on social and across devices. While watching TV, more than 60 percent of adults use a desktop or laptop and 50 percent use a smartphone, according to recent research by Nielsen and YuMe, a video ad technology company. Since its season three premiere, All Stars was the top-ranked show across social on Thursdays for all but one week, according to Nielsen’s Social Content Ratings.

The league is part of a larger trend, as linear programming franchises extend into an entertainment ecosystem that includes social and digital activations to deepen engagement. Other examples include efforts like Bravo’s The Real Housewives stickermojis and AMC’s The Walking Dead Encounter augmented reality app as well as third-party apps that provide interactivity or social overlays to enhance the viewing experience. 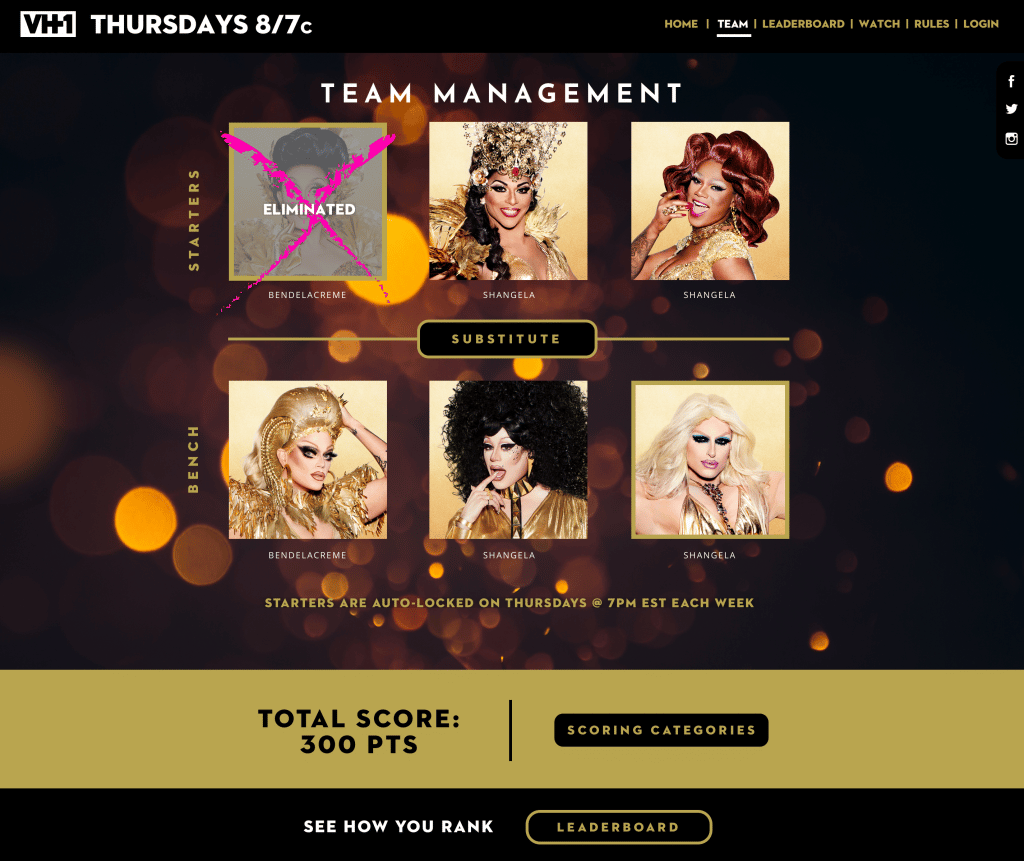 A player’s view of the bracket.

To play the All Stars league—which was developed with the help of digital agency Seven2—players had to choose six drag queens to join their team before episode two aired. Each week before the new episode airs, players choose three “starter queens” and three “bench queens” based on how they think each will perform that week. Players also have access to a leaderboard where they can compare their standings with their Facebook friends and other players globally. At the end of the season’s finale, airing tonight, the winner will receive two tickets to the taping of the season 10 finale of RuPaul’s Drag Race.

As a way to drive tune in and to encourage live, sustained viewership throughout the episode, league creators invented the “Clock the Phrase” component. Players can earn extra points by watching for one word of a certain phrase to appear on screen during each commercial break. Once the show’s over, players have to type the entire phrase into the microsite within 30 minutes of the live show to prove they watched the entire show.

As for Cooter, tonight’s finale is the first time his prediction skills will be tested in front of thousands of other fans. “In the past I’ve always been able to figure out the winner based on the talent,” he says.

As first appeared in V by Viacom.